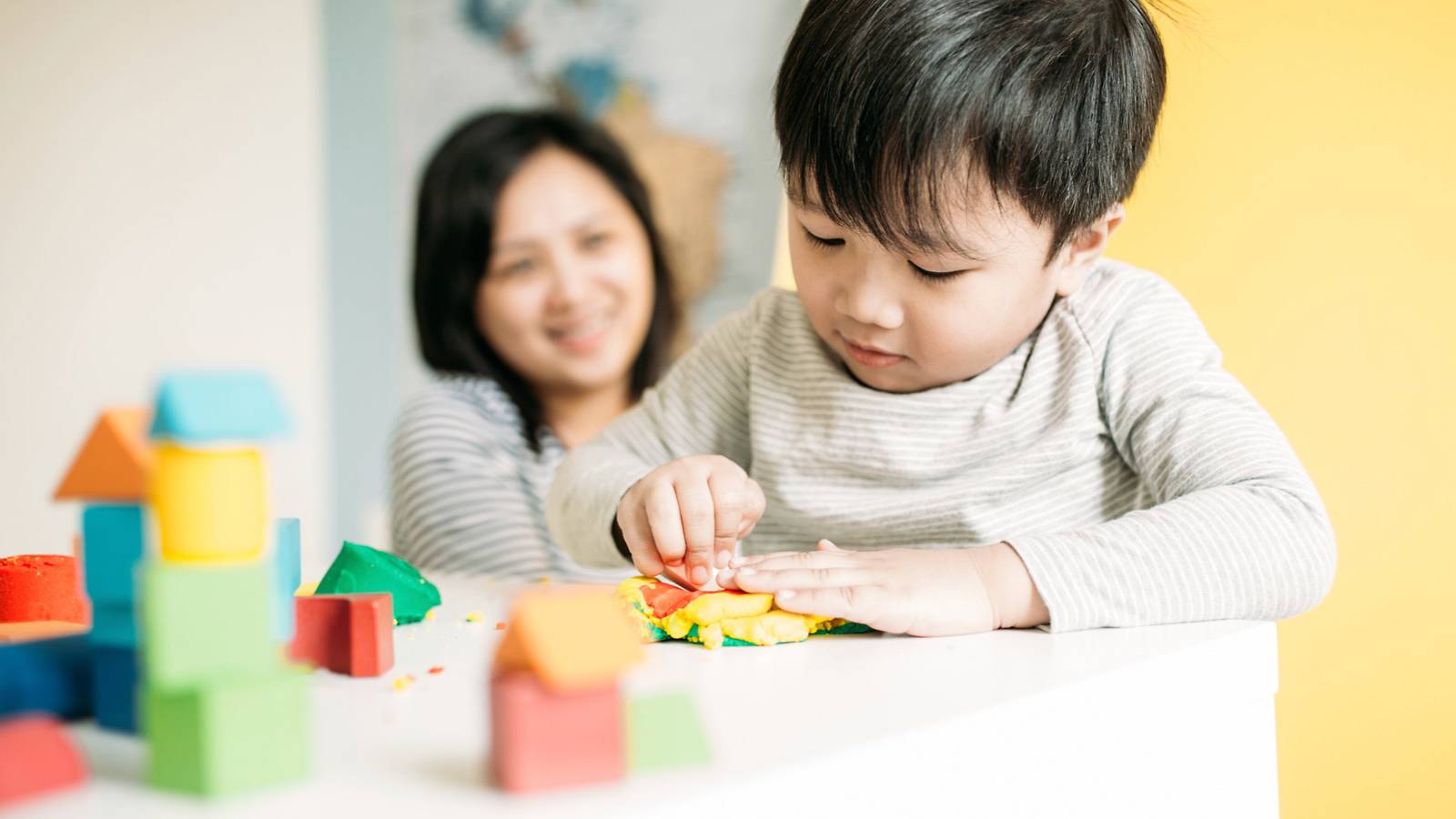 The ability to play on one’s own is quite the milestone in every toddler’s (and parent’s) life. He’ll take a vital step towards independence, while you’ll get to enjoy little nuggets of “me-time” (hurray!).

Playing independently allows your tot to focus, trains him to have a longer attention span, and be content with the things he has.

When he figures out how puzzles work or tries to build the highest tower with his blocks, he’s developing self-reliance and exercising his own creativity. Says Henry Toi, managing director of Nurture Craft, a company that develops educational content, “It’s an important progression to helping a child gain confidence, develop creativity and learn to explore the world around him.”

At the same time, he’ll grasp that you have things to do, too, especially if you’re caring for his baby sibling. He’ll also learn to be patient, since you’re teaching him not to expect instant gratification.

Here’s what you can do to nudge him towards this form of play:

1. Give him lots of “together time”

You’re filling up his “emotional tank”, so he’ll have adequate attention from you and feel secure. Besides giving him the confidence to play on his own later, this ensures that he doesn’t feel abandoned when you do leave him on his own.

Spending lots of time together with him will also give him the tools to “learn” how to play. For instance, if you frequently build a “city” with his building blocks, he’ll realise that he, too, can do this on his own.

Don’t expect him to take to his independent play-time right away. Help him get him started ― for instance, you can set up his puzzle pieces and show him how to fit in several of them. Or bring out the Lego blocks and suggest a theme ― say, vehicles ― that he can work on his own for the next few minutes.

When you think it’s the right time to take a step back, tell him what you will be doing, assure him that he will be fine and that you’re there if he needs you.

You can increase the duration of independent play when he gets better at it.

It may be a good idea to set him a block of time. For instance, tell him that you’ll be folding the laundry for the next 10 minutes. Set the kitchen timer, then tell him that when it sounds after 10 minutes, you can do something together, like read a book. You can increase the duration of independent play when he gets better at it.

3. Stay in sight or within earshot
No one enjoys complete isolation, not least your little one, so resist the urge to hop into the kitchen and start cooking dinner. Instead, try to do something in your child’s company. For instance, you could read a book on the couch, while he plays with his trains on the rug. Toi notes, “If he comes clamouring for your attention, simply tell him that you are busy and will play with him later.”

Ng Yee Nee, mum to Beverly, 2, says she was had the mindset that her daughter would play independently in her play yard, since it contained her favourite toys. “She totally resisted that. But when I told her to grab her favourite toys and come sit with me in the living room as I caught up with my TV dramas, I realised that she actually had no problems playing independently.”

The right toys are crucial in encouraging your child to play independently... More tips ahead! 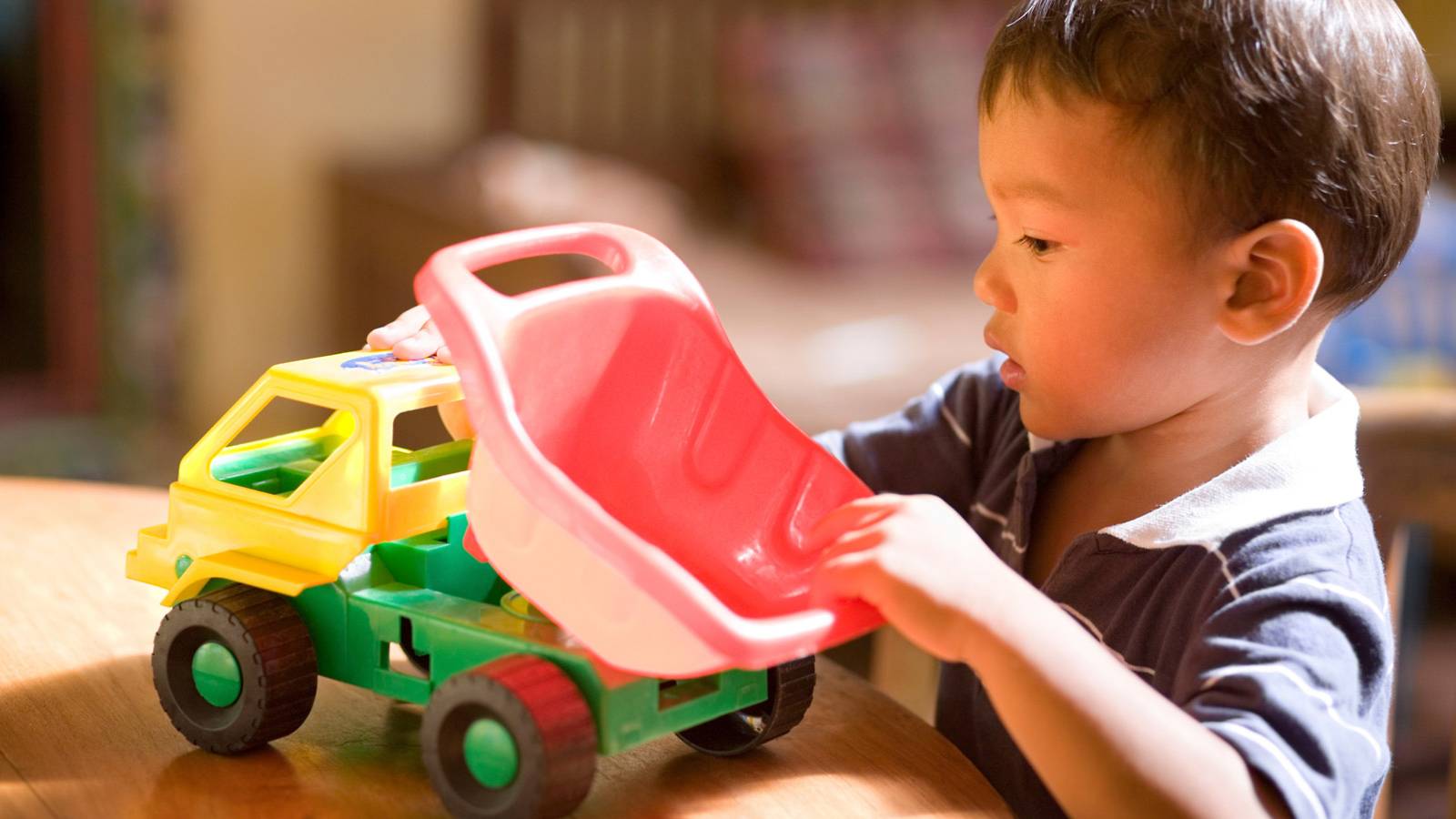 The next time you pick a plaything for junior at the mall, choose something open-ended that can create limitless possibilities. “The toy should have multiple uses, like blocks, cups and boxes,” explains Toi. “Pretend play toys such as dolls and trucks are great as well.”

And don’t overbuy. Look at what he has in his toy chest, and pick a range of playthings. For example, during a play session, make up a bundle comprising a puzzle, a couple of toy trucks and a set of toy musical instruments he can engage with. Toi reasons, “Too many toys will distract the child and prevent him from having focus, therefore shortening the time he spends on independent play.”

Following this concept, create several toy bundles from what’s available and put them on a toy rotation system. You’ll be amazed at how much more time your child will spend on each toy and how much more he’ll get out of them.

You are your child’s biggest role model, so there’s nothing he adores more than to mimic you. Toi says, “If he loves watching you cook, you can provide some cooking utensils and let him play chef.” Let him “cook” right next to you in the kitchen, as you prepare dinner. Just because you are next to him doesn’t mean he isn’t playing independently.

“Too many toys will distract the child and prevent him from having focus, therefore shortening the time he spends on independent play.”

Once he’s happy with what he’s doing, don’t comment on what he’s doing, or suggest that he does something else. What you can do, is praise him or make positive comments every now and then. You will probably get plenty of requests to “look at what I made mum!” or “come check this out!” Give him a big smile and tell him that he’s doing a great job, and that you’ll join him when the buzzer goes off.

Even if he’s making a huge mess (which kid hasn’t tried jamming Playdoh bits in the crevices of their Lego pieces?), resist the urge to step in, as independent play is all about free play and you want him to get that message. Know that you’ll be able to spend some time together later clearing up.

7. Know when to intervene

If you have more than one child, some intervention may be necessary, especially if they come to fisticuffs. Safety is another reason why you may need to step in ― if your tot is playing with small blocks or other choking hazards, you may have to make sure he doesn’t place any in his mouth.

Independent play doesn’t happen overnight. Most tots aren’t receptive about going solo right away. But be patient with his progress and help him realise that “alone” time isn’t always a bad thing. Tot notes, “Always keep safety considerations above everything and make sure you can still keep an eye on your child.”

Make your own play dough and paint