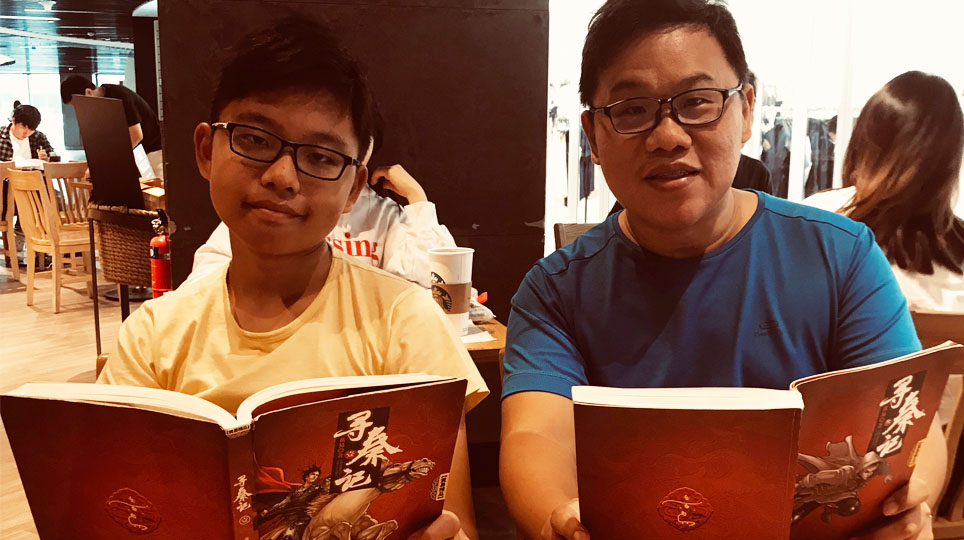 But that idea resurfaced recently when I lamented to my friend HJ that my younger son, Conan, only enjoys reading English books and has scant interest in Chinese ones. HJ and I share a common concern that Singapore children have a low rate of reading Chinese books.

Conan, who entered Secondary school last year, dismissed Chinese books as “lame and boring” when I suggested that he should read more.

HJ gave me some sound advice. She said, “Do not frighten them off with wordy books. Start with books that are filled with more illustrations and fewer words. Engage children with storytelling before passing them the book.”

“Do not frighten them off with wordy books. Start with books that are filled with more illustrations and fewer words. Engage children with storytelling before passing them the book.”

While I had done all that, I’d focused a tad too much on English books and not enough on Chinese ones. When he was barely age 3, Conan started reading books meant for preschoolers. Today, Conan is a voracious reader of English books, although the last Chinese book he’d read was a long time ago.

No interest in Chinese books

In Primary 3, he’d been drawn to a book I’d recommended, The School Adventures of Cool Crawlies (酷虫学校). Then, his interest had been piqued by the Chinese fiction series for young readers ― written in simple Chinese, it is a delightful blend of science fiction, comedy and adventure. The books also illustrate every crawling creature very comically.

But Conan’s appetite for Chinese books ended as soon as he finished the twelfth and the last book. My boy subsequently experienced a 3-year Chinese book “drought”. Although I borrowed other Chinese books from the library for him to read from time to time, these books were returned untouched.

Initially, I thought that the problem was because there’s a dearth of interesting Chinese children’s books here. However, HJ’s efforts to encourage book reading through her book reviews moved me. I thought, “If my friend can do so much for others, surely I can do no less for my children.”

Not easy finding the right book

At the Central Library, surrounded by thousands of books, I was clueless over which Chinese books to pick for Conan. These days, apart from reading books about Traditional Chinese Medicine healing methods, I hardly read any other Chinese books. I thought to myself, “What will interest Conan to pick up reading Chinese books again?”

It has to be something uniquely Chinese not found in the English genres he reads. The book must also be interesting enough to keep him eager to read more. Then I had a brainwave, why not recommend wuxia novels (武侠小说) to him?

Wuxia, which literally means “martial art heroes”, is a Chinese fiction genre about the adventures of martial art pugilists in ancient China. This Chinese sword fighting genre is so popular that it has been transformed into Chinese television series, movies, comics and video games. Such books would be a safe bet for young people! 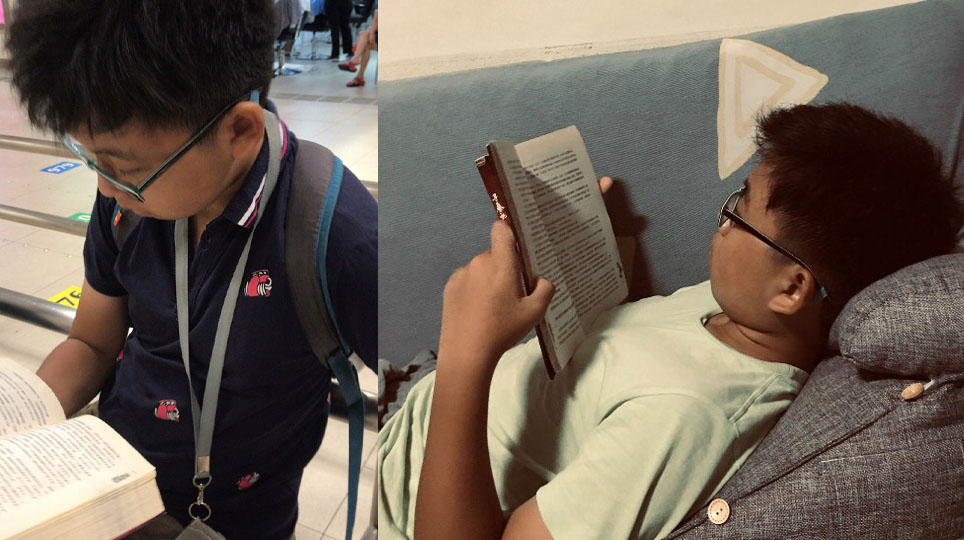 I randomly picked up a Louis Cha book, better known by his pen name Jin Yong (金庸), arguably everyone’s favourite wuxia writer of all time. But I frowned when I turned to the first page.

The text was in traditional Chinese characters (繁體字), which is more popularly used in Hong Kong and Taiwan. In Singapore, we use simplified Chinese characters (简体字). Worse, the characters had to be read vertically from top to bottom, and from right to left. This seemed too formidable for a beginner reader.

I cast aside my own author and story preferences. Only one consideration mattered: The book must be interesting and readable from my child’s perspective.

By a stroke of luck, I found a wuxia novel with simplified Chinese characters. As the words ran horizontally from left to right, and the lines from top to bottom, it seemed much easier to read! The novel, A Step into the Past (寻秦记), was written by Wong Yik (黄易).

While I had neither heard of this author nor read the novel, I vividly recalled a 2001 Hong Kong television drama series with this title. In that intriguing show, the protagonist, Xiang Shao Long (项少龙), a top-notch special agent was teleported some 2,000 years ago into the Warring States period in ancient China.

Armed with ancient historical facts and modern world knowledge and combined with his strategic military know-how and martial arts prowess, Xiang quickly became an invaluable player in the war to unite China under a single kingdom.

I didn’t hesitate to borrow the entire six book-collection. When I told Conan these Chinese books were meant for him, he shrugged his shoulders. Beckoning me to look at the thick English books he had borrowed, he announced, “Look, I already have four books to read. They have to come first.”

#2. Turn the reading experience into something memorable

I had expected it to be an uphill task, but I was prepared. I told my son, “No worries, I am the one reading. All you need to do is to sit back and listen. Then tell me if the book is a good read.”

To capture his interest, I had to tell the story well with plenty of expression and emphasis. Having read through Chapter One earlier, I deliberated how and where to modulate my voice like an experienced audio book narrator. I even considered carefully where to pause and how to engage him.

“To capture his interest, I had to tell the story well with plenty of expression and emphasis. Having read through Chapter One earlier, I deliberated how and where to modulate my voice like an experienced audio book narrator.”

At first, Conan sat across from me. But as the plot thickened, he quickly jumped to my side, leaning close enough to read the book along with me. Encouraged, I continued reading and chuckled along with him at the parts when Xiang walloped up the bad guys during a brawl. When I hesitated over whether to continue reading aloud, Conan gazed at me, puzzled.

“Are you sure you really want me to continue reading this?” I asked him intently.

Sensing something amiss, Conan quickly scanned the lines below. Before he could reply, I deliberately raised my voice ― loud enough for everyone to hear ― and read, “Xiang pulled the nightclub beauty Zhou out of the pub. Zhou asked him flirtatiously, ‘Where are you taking me to?”

Xiang lifted her into the passenger seat of his Jeep and laughed, “Where else? Home, of course! I can’t afford to pay for expensive hotel room.”

Blushing, Conan stopped me before I could read the next line, “Dad, I think it’s better that I read the rest in silence myself!”

I laughed heartily. I then found my son reading the rest of the story on his own. He continued to read the book over the next few days, even taking it with him to school. A week later, we had a conversation about the book.

I asked Conan, “Don’t you find the storyline of this novel strikingly similar to Game of Thrones? The plot centres around powerful men and pretty women who play a deadly game of life and death to seize control of an unified kingdom.”

Reading to children is an unfinished business ― if you think that you have done enough, perhaps you might want to rethink!

William W K Tan, 48, an educational consultant and blogger, is a father of two sons aged, 14 and 16.

5 mistakes to let your kids make 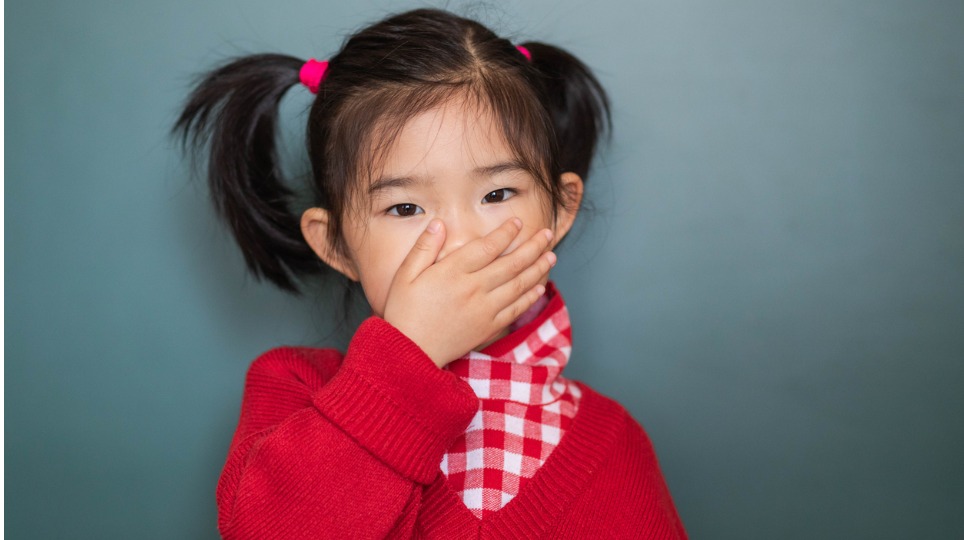 How to help your child with stuttering 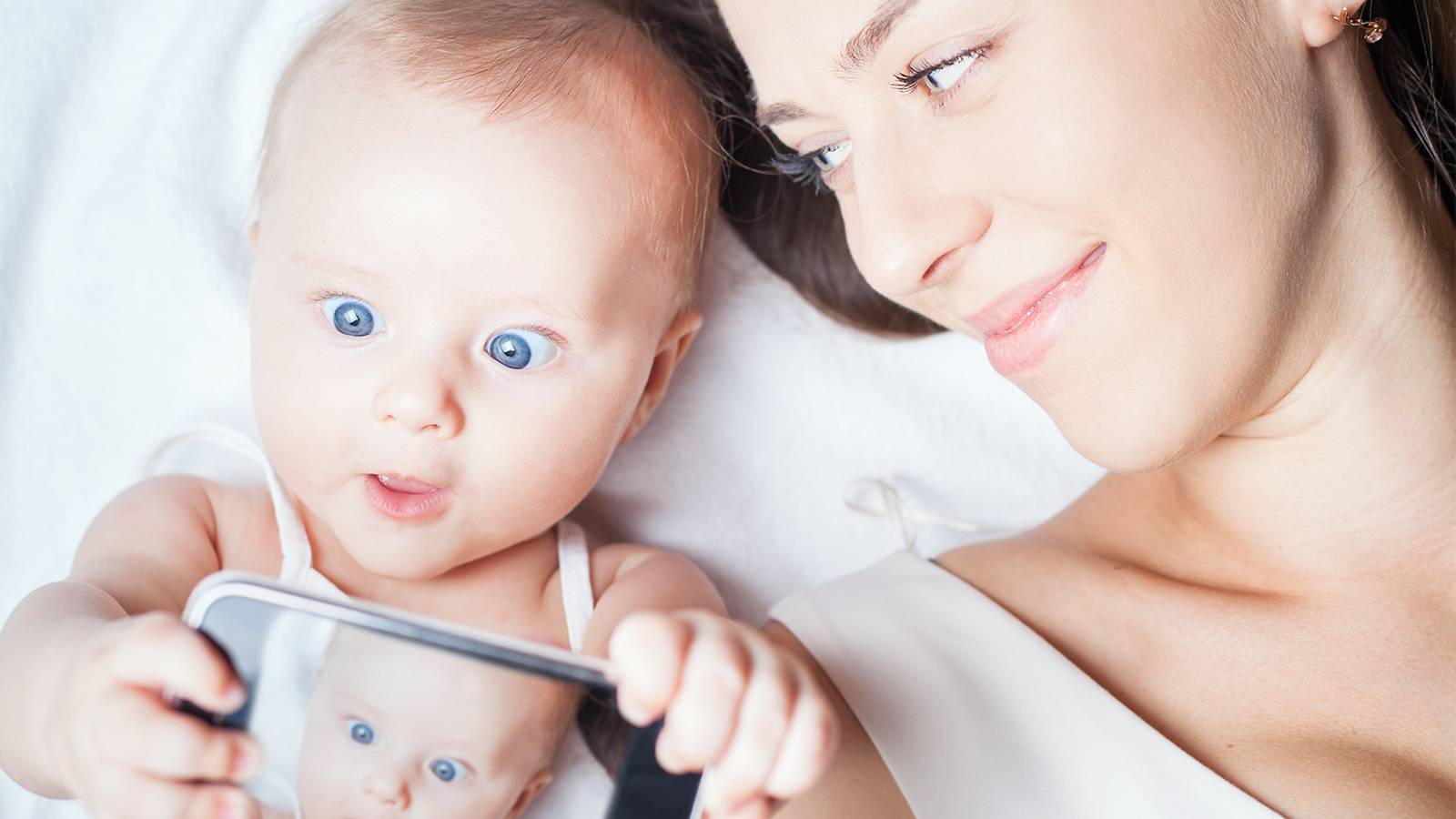 OPEN LETTER To my firstborn 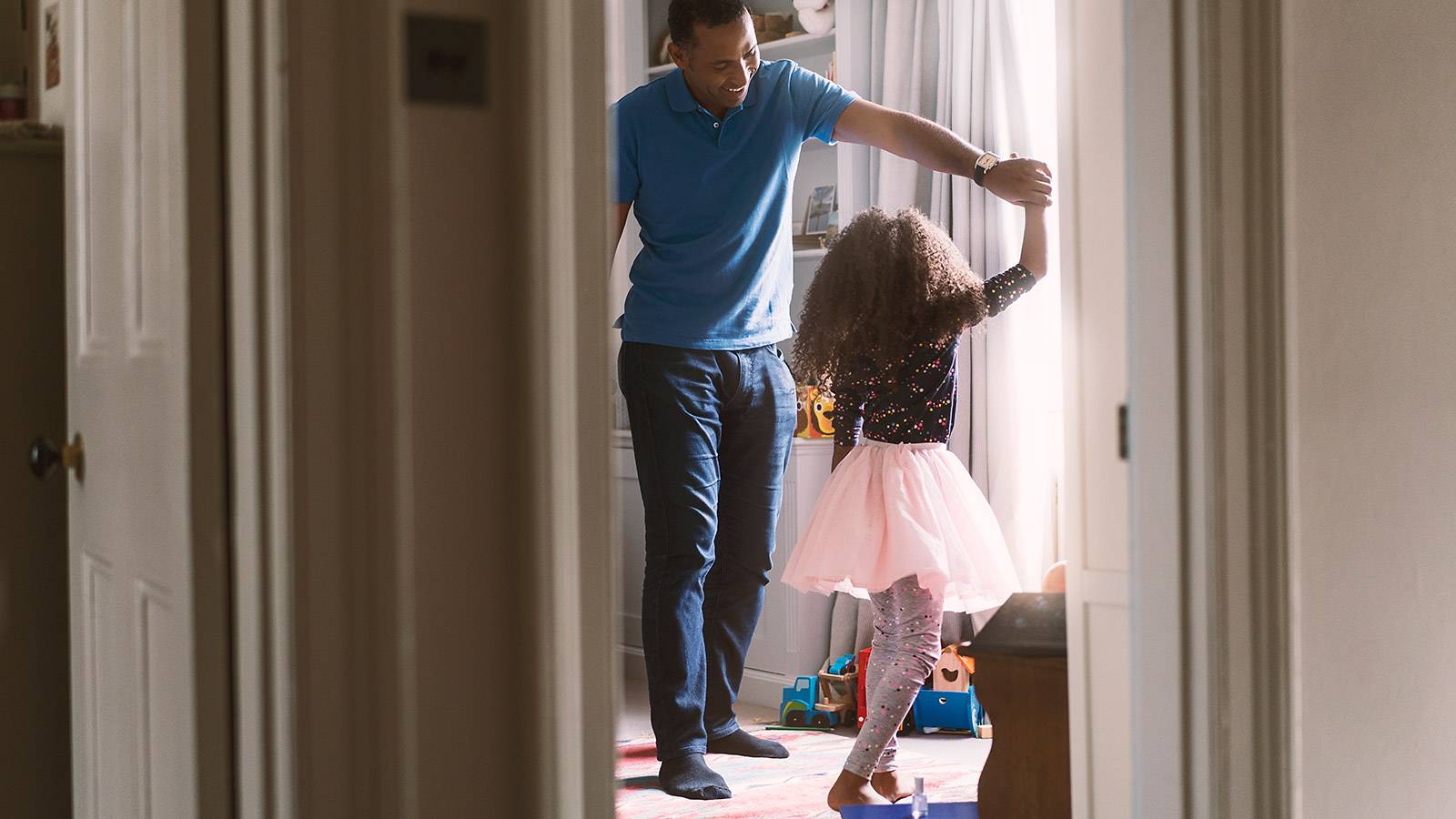 9 ways to be a more effective parent

5 ways to salvage your relationship (other than couple’s therapy) 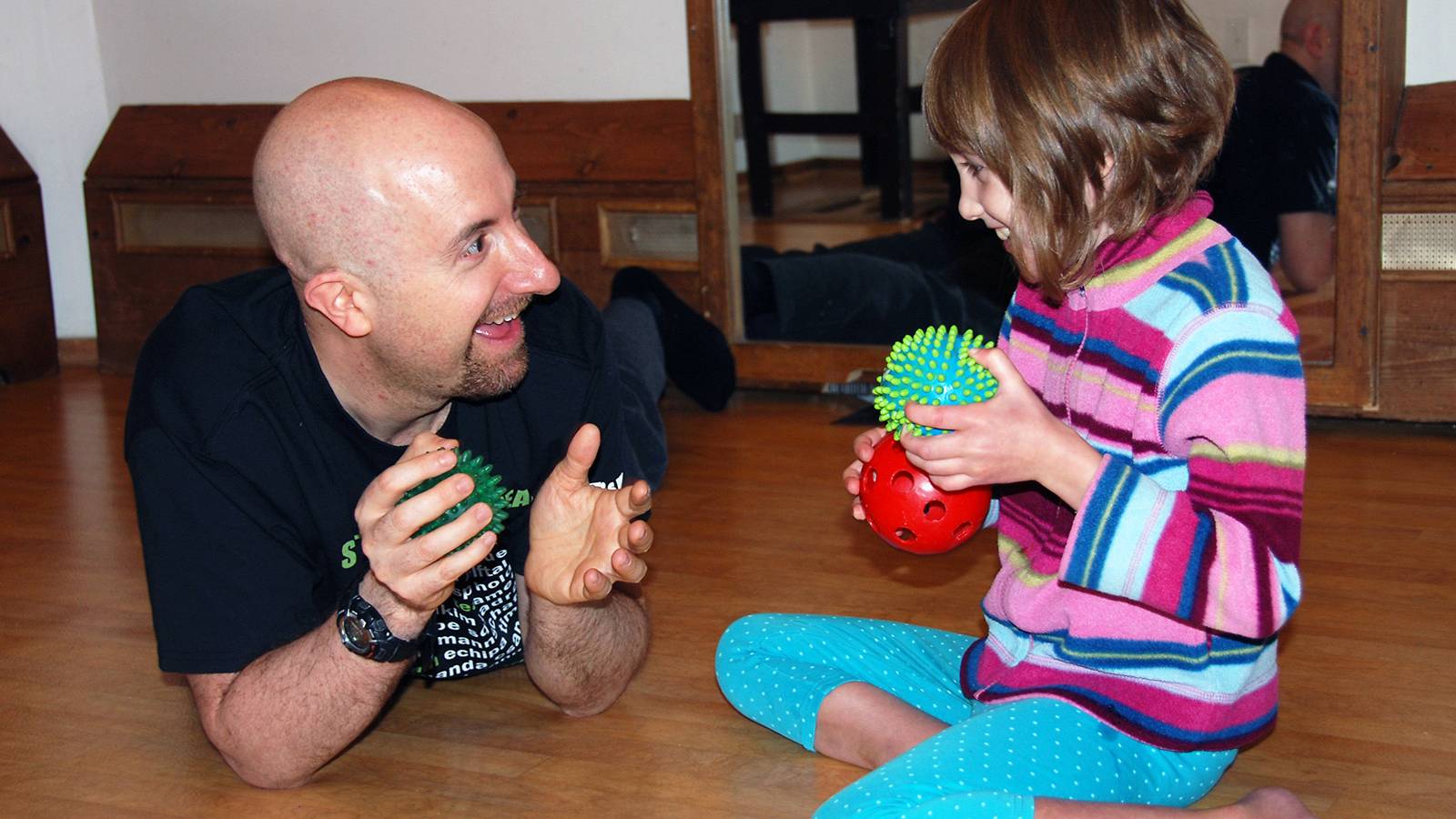 CONVERSATIONS WITH… An Autism Expert 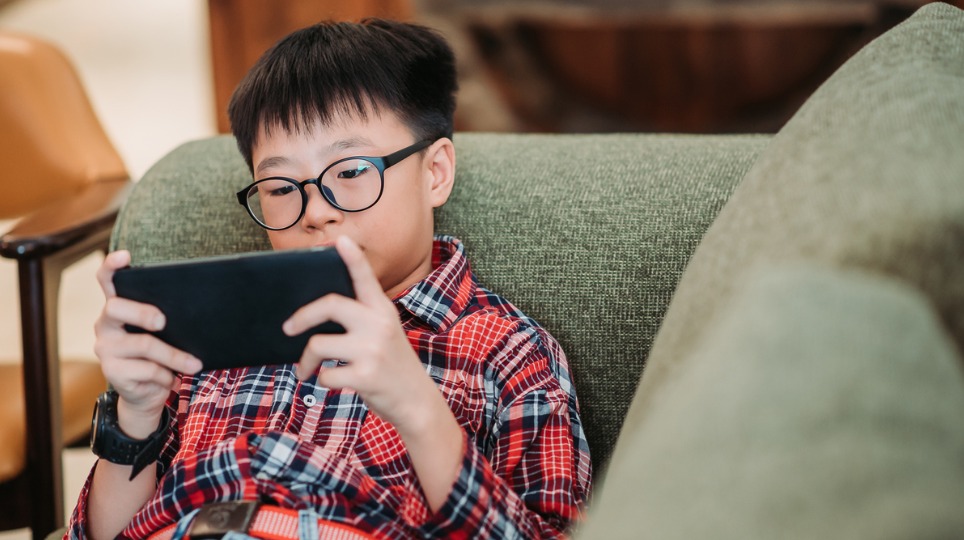